Is There a Permanent Solution to Persistent Stomach Ulcers? - 5 Herbs That Can Help

Hello there, my name is John Okeke, and...

.. I'm the Co-Founder of HERBSVIO, a platform which has helped a lot of people achieve healthy living and lasting health solutions using the right herbs.

One of the questions I get asked a lot is... "Whether it's possible to get a permanent solution to persistent stomach ulcers...".

I'll answer that in a bit.

But before I do, permit me to share my personal experience with stomach ulcers with you.

I promise this is not like the usual stories you read online.

Just stay with me.

I just turned 33 and you see... I’ve suffered from the pains of stomach ulcer from as far back as I can remember (not anymore though).

I think it started when I was in secondary school in Onitsha. I can vividly remember skipping school so many times because of the tormenting stomach pains.

It began with a burning sensation in my stomach and gradually extended to tormenting pains towards my abdomen, just below the belly button.

...And then came the severe chest pains.

At first, I thought it was something that could easily be treated with a quick visit to the hospital.

...But little did I know that it was the beginning of unending stomach pains and discomfort, as one medication after another failed to provide permanent result.

From Omeprazole to Gascol antacid syrups and ulcer kit.... you name them, I've tried it all.

Finally, the doctor said I just had to manage the ulcer with medications, and that there is no known permanent cure for stomach ulcers.

I was also told not to eat certain foods and avoid drinking alcohol (which was quite difficult).

I kept asking myself... what causes this ulcer that has made it so difficult to heal permanently..?

So, What Exactly Causes Stomach Ulcer?

According to research, most stomach ulcers are mainly caused when the stomach is infected by a certain bacteria called Helicobacter pylori (H. Pylori).

Now, this bacteria breaks down the stomach’s defense against the acid it produces to digest food.

... And because of this, the stomach acid ends up causing an open wound in the walls of the stomach or the intestines.

That excruciating pain you feel in the middle of the night which gets you rolling around on the floor...

At one time, I even tried some home remedies such as, garlic, honey, unripe plantain, etc.., but they didn’t help.

Another cause of stomach ulcers is the long-term use of nonsteroidal anti-inflammatory drugs such as ibuprofen, naproxen or aspirin.

In the course of my research and in the quest to end my suffering...

I discovered (with the help of my long-time friend, Tunde) that there are 5 Unique Herbs that when combined in the right proportion, will not only effectively heal the wounds in the walls of the stomach...

... But also permanently eliminate the H.Pylori bacteria infection in the stomach that causes the stomach ulcers.

Here are the 5 Herbs;

With these 5 Herbs, you can finally heal your stomach ulcers permanently without wasting more money on medications.

You can imagine the type of research that went into discovering these amazing herbs for stubborn stomach ulcers.

We also discovered that these same exact herbs works effectively for Acid Reflux and Dyspepsia (Indigestion).

It's almost two years now, and I can't remember the last time I complained of ulcer pains.

But There's a Small Problem;

These herbs are very rare to find in Nigeria. Aloe Vera may be readily available, and if you're lucky you may stumble upon Lonchocarpus Cyanescens.

However, the remaining 3 are hardly found.

I had to get my friend Tunde, who is resident in India to help source for some of the herbs.

One of them (Amaranthus Spinosus), is even native to the tropical Americas.

However, There is a Way To Get Them Now;

You can have access to these herbs right here in Nigeria, if you wish.

All the Herbs have been packaged in a natural liquid form, and you can get it today...

... that is,  if you're really serious about ending the tormenting ulcer pains once and for all.

Now, I'm not the only one who has been permanently healed with these ulcer herbs.

See what Mr. Yahaya from Makurdi had to say after using the herbs; 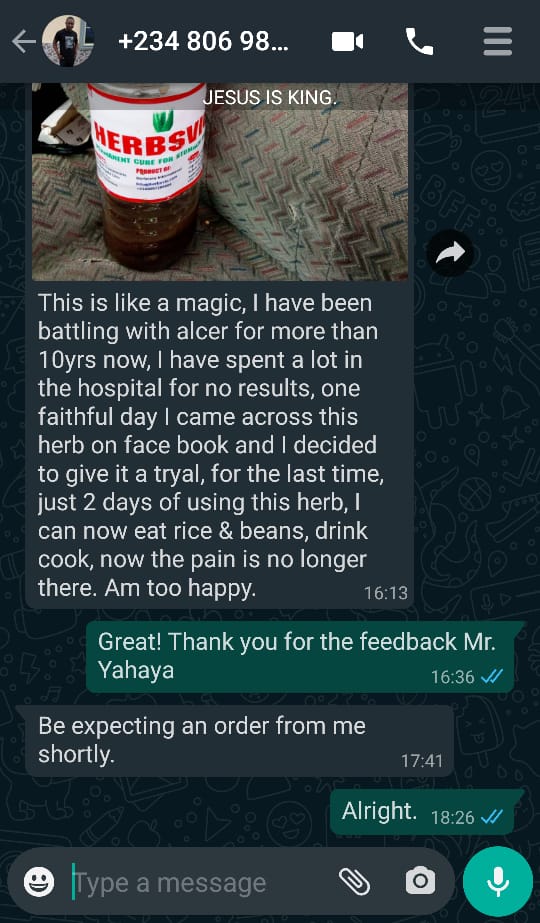 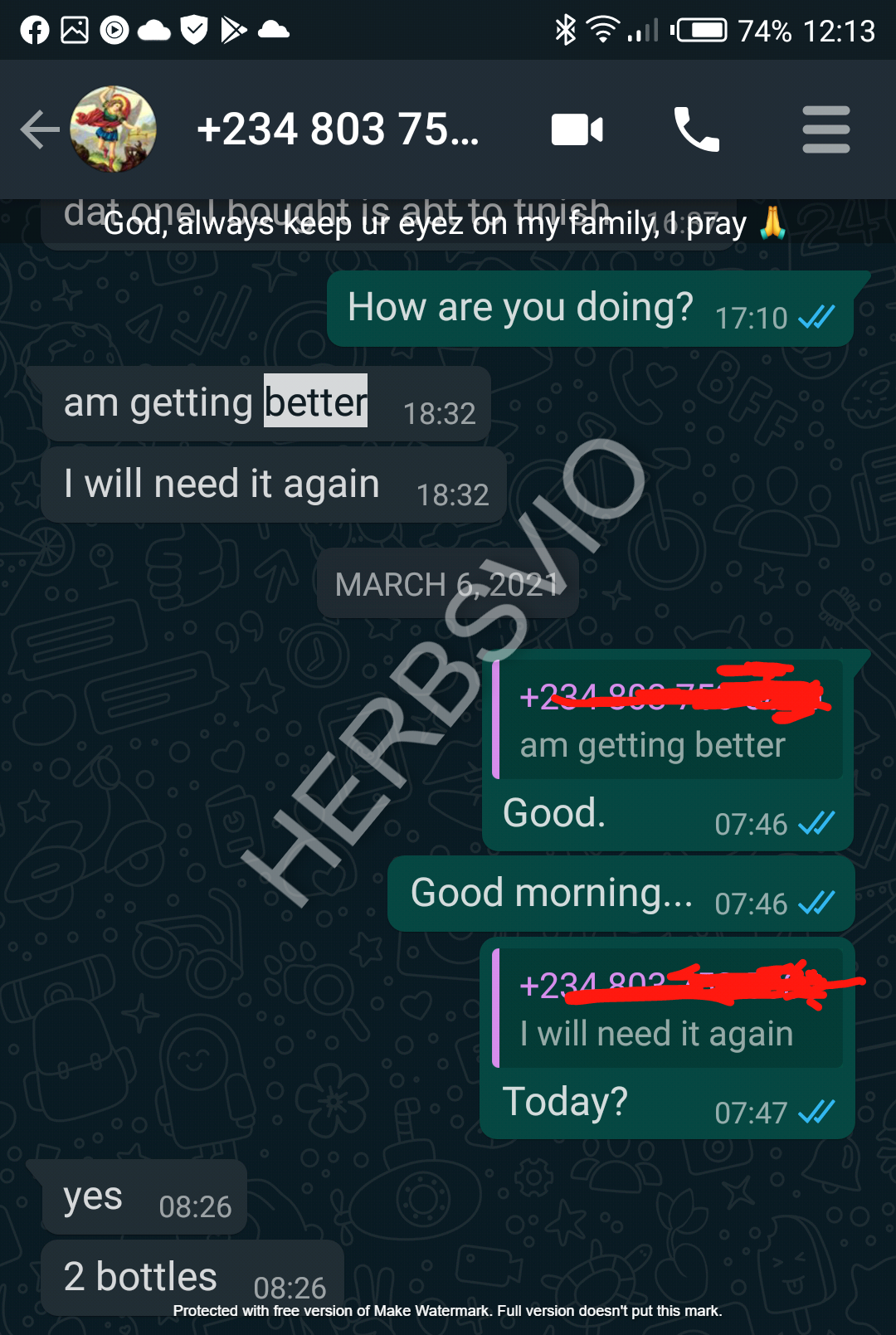 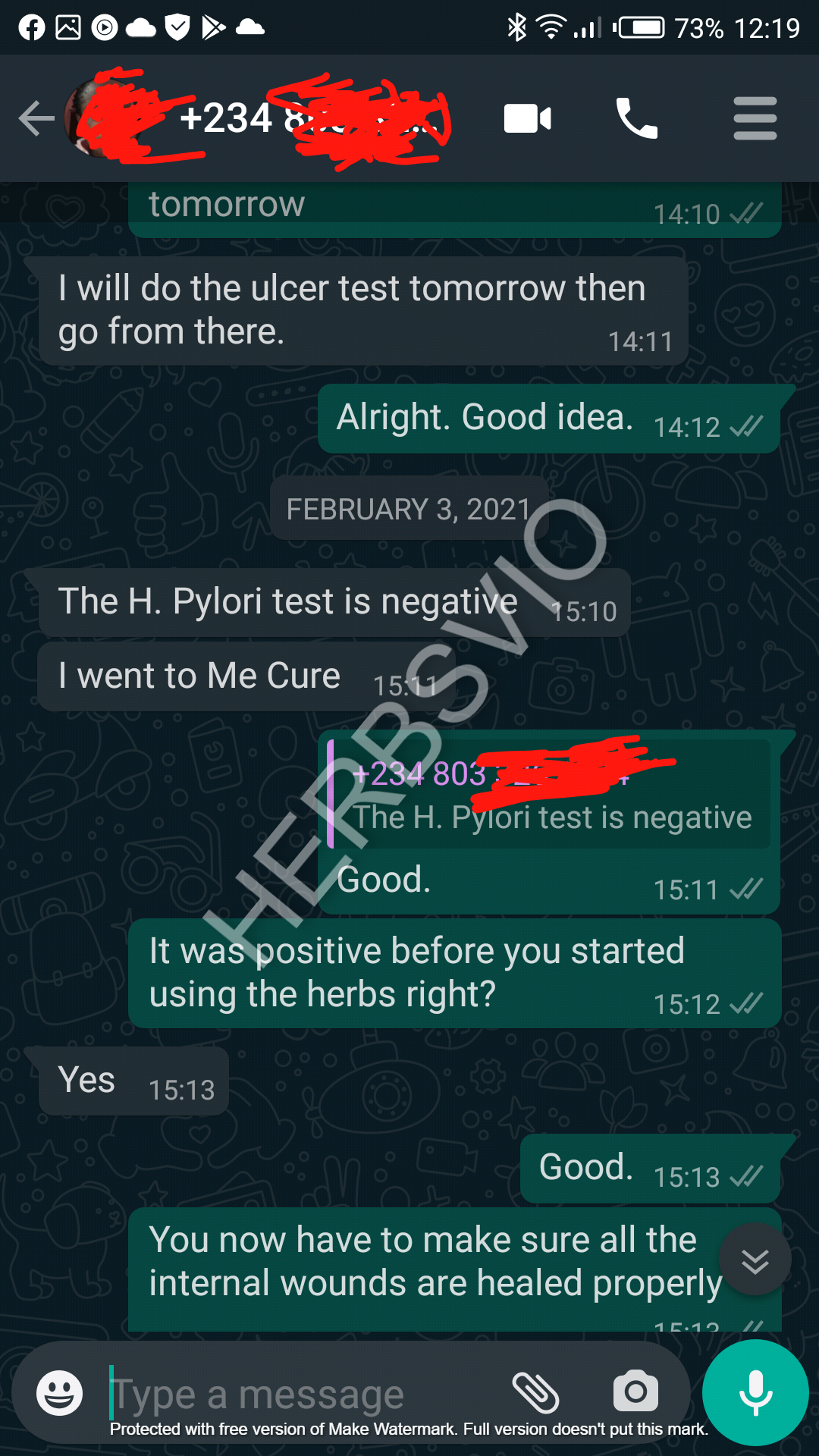 All contents are protected under the Nigeria Copyright Act pursuant to Nigeria and International Copyright Laws. Any form of Copy/Edit/Use of our contents without expressly written permission and will be subject to the maximum fine/penalty imposed by the law.